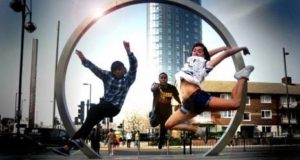 I’ll be a speaker at the International Conference: “Pop Moves: Celebrating the Popular, Practicing the Urban”, organised by University of East London, Stratford Square Campus, Sat Nov 18th 2017, from 9:45 am to 6:30 pm.

As part of their ten-year anniversary celebrations, The PoP [Performances of the Popular] Moves committee, in partnership with the CPAD research group at the University of East London, invites you to celebrate our annual conference. The conference engages with intersections between popular practices and the Urban: the city as a space where culture is created, represented and disputed.